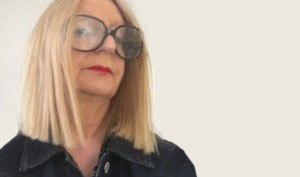 Ewa Partum is the founder and president of the ARTUM Foundation.
From 1963-65, she studied at The State High School of Fine Arts in Lodz/Poland and, from 1965-70, at the Painting Department of Warsaw Academy of Fine Arts/Poland. She belongs to the first generation of Polish neo-avantgarde and is a pioneer of European feminist and conceptual art. She is engaged in linguistic activities, institutional critique and feminist art. The artist describes her artistic practice as a logic progression from conceptual art to conceptual feminist. She highlights the year 1974 as the key moment of formulating her own artistic language and embarking on the practice of feminist art. In recent years, Partum participated in many individual and group exhibitions including: Jesteśmy at Zachęta National Gallery of Art in Warsaw in 1991; Wack! Art in the Feminist Revolution at MoCA Los Angeles in 2007;  European Contemporary Art Biennale Manifesta 7 in Italy in 2008; re.-act. – feminism – performance art of the 1960s and 70s today at the Akademie der Künste in Berlin; REBELLE. Art and feminism 1969-2009 in Museum voor Moderne Kunst in Arnhem; Gender Check. Feminity and masculinity in the art of Eastern Europe in the Museum Moderne Kunst in Vienna in 2009; Promesse du passé in the Centre Pompidou in Paris in 2010; Intense Proximity, La Triennale at the Palais de Tokyo in Paris in  2012; 18th Sydney Biennale in 2012-13; Bigger Splash Painting after Performance in 2012-13 at Tate Modern; Transmissions: Art in Eastern Europe and Latin America, 1960-1980 at MoMA in 2015-16. and many others.

Berenika Partum is the Program Director &  Co-President of the ARTUM Foundation.
She graduated in Art History and History from the Freie Universität Berlin (M.A.) and in Culture & Media Management from the University for Music and Theatre in Hamburg (M.A.). Her professional experiences, centered around artist management, curating, exhibition organization and project management as also research in the field of cultural management. Berenika gained professional experience in cultural management in various cultural institutions in Berlin: Polish Cultural Institute, Akademie der Künste, Neuer Berliner Kunstverein, Hamburger Bahnhof – Museum für Gegenwart among others. For more than twenty five years she has also participated in the realization of numerous international exhibitions of Ewa Partum, including participations in group exhibitions such as 18th Biennale of Sydney in 2012, Paris Triennale 2012, Raven Raw, London in 2015, Active Poetry at TATE Modern London, 2006, Collected Views from East or West, Generali Foundation in 2004 in Vienna, among many others. Since 2017 she also works for a project that promotes the development of ideas that strengthen national film industries in Central and Eastern Europe in a structural form (SOFA – School of Film Advancement). As a freelance Curator she organized different shows with the focus on art from eastern and central Europe like the Festival “Polenbegeisterungswelle – Cultural Topographies of Polish Berlin” at Kunstquartier Bethanien, Berlin 2017 (with Iwona Bigos and Jagna Anderson) and with Karolina Majewska-Güde “Ewa Partum. My Gallery is an Idea. Galeria Adres Archive“ at Galeria Studio, Warsaw/Poland, 2019. Together with Alicja Kaczmarek (Centrala Birmingham/UK) and Agata Lisiak (Bard College Berlin) she is the Founder of a new Brand Organisation from Brimingham named Centrala Berlin and a Board Member of Agit Polska – Polish-German Initiative for Cooperation in Berlin. 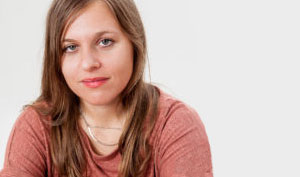 Karolina Majewska-Güde is the Head of Archive of the ARTUM Foundation and a researcher, writer and curator. She graduated in Art History from Adam Mickiewicz University in Poznań and in Visual Histories from the Goldsmiths University in London. She is currently a doctoral candidate at the Institute of Art and Visual History at the Humboldt-Universität zu Berlin completing a dissertation on Ewa Partum’s artistic practice. In 2016 she received the Scholarship from the Ministry of Culture and National Heritage PL. Her research focuses on Eastern European neo-avant-garde, transnational and feminist art history and art based research. She is a member of the International Association of Art Critics, AICA.