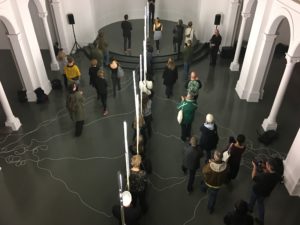 Different generations of artists have been presented to the Berlin audience in a combination of formats such as exhibitions, studio visits with artists talks, meetings in galleries, expert panels, live performances and activities in the public space. We were not looking for commonalities between the work of political migrants and younger artists of united Europe. We draw rather attention to individual artistic statements so as to open up spaces for personal narratives and overlapping references. A versatile and reciprocal relationship to Berlin as a cultural location may thus function as an interpretative bracket; the city itself turned out to be a sui generis document, a living archive in which everything conglomerates: space, time and actors. 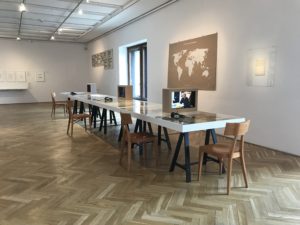 The exhibition my gallery is an idea. galeria adres archive reconstructs the history of Galeria Adres, the independent artistic institution run by Ewa Partum between 1972 and 1977 in  Łódź. Galeria Adres collaborated with Krzysztof Wodiczko, Zbigniew Warpechowski, Dick Higgins, Richard Kostelanetz, Jochen Gerz, Endre Tót, Ben Vautier, Eric Andersen, among other artists. It formed part of an international artistic network that ran across the cold war East-West division and functioned beyond official communication channels. Materials gathered in the Archive of Galeria Adres is presented in its entirety for the first time since 1977. The exhibition also features Ewa Partum’s works from the collection of Galeria Studio in Warsaw and the artist’s intervention, created specifically for this occasion, which refers to the International Film Festival organised by Galeria Adres in 1977.